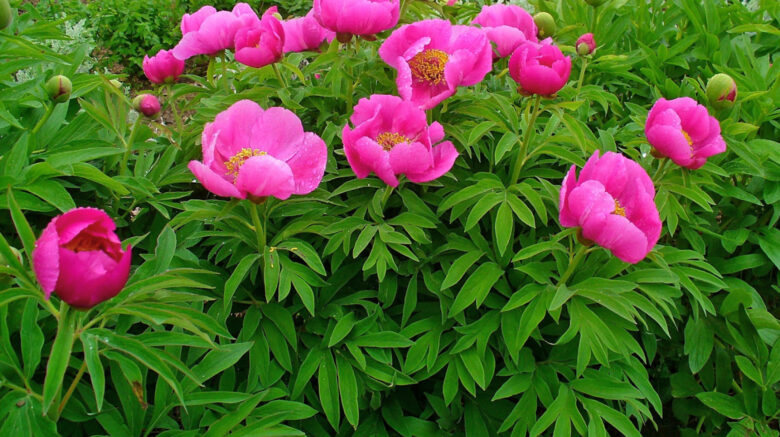 The genus Paeonia, previously belonging to the Ranunculaceae family but now assigned to the Paeoniaceae family (of which it is the only genus), currently includes over thirty species (accepted names) (according to [WFO]). They are generally herbaceous plants provided with rhizomes and/or fleshy or swollen roots [WFO], even if also suffruticose species exist (all included in the sect. Moutan, the so-called tree peonies, often used as garden plants).

According to the tradition of Greco-Roman medicine, peonies are endowed with remarkable therapeutic virtues. Theophrastus reports that the name of the genus actually derives from that of Paeon (Παιών), an ancient Greek divinity and physician of the gods (later identified with Apollo or Asclepius), who used the roots of the plant to heal Pluto from a wound inflicted to him by Hercules. The same medicine was used by Mars to heal the wounds caused by a clash with Diomedes [Peroni].

Also according to Pliny the Elder (“Naturalis Historia”, book 25 par. 29), the peony, considered by the author the most ancient of cultivated plants, retains the name of its creator (Paeon).

The Mediterranean tradition recognized two types of peony: the male peony (Paeonia mascula (L.) Mill.), which according to Dioscorides has “walnut fronds”, and the female peony (Paeonia officinalis L.), which instead has leaves “incised as those of Alexanders”. An interesting features of these plants is the coexistence in the fruits (follicles) of both shiny blue-black and red seeds (the latter being probably sterile). This characteristic is reported in classical herbaria, in which a therapeutic distinction is also made between the two types of seeds, also basing on the different signature: for example, Dioscorides, writes “ten, or twelve grains of his red seed drunk in austere wine stagnate red menstruation” (this prescription is found even in the Herbario novo, written by the Renaissance physician and botanist Castore Durante and published for the first time in Rome in 1585).

Although the species most commonly used today is P. officinalis, P. mascula has been traditionally assigned the same properties [Durante, Mattioli]. According to Castore Durante, the roots of the male peony “are very powerful, & valuable against poisons” [Durante].

Nowadays the roots and the flowers of peonies are recognized as antispasmodic, sedative of the central and vegetative nervous system, narcotic, muscle relaxant, pain relieving and anti-inflammatory [Peroni], but in fact peony’s activity is rather complex. Traditionally it is considered an emmenagogue capable also of expelling afterbirth, a pain reliever/antispasmodic, a plant that “stagnates the body flows”, “cleanses the obstructed liver, & kidneys”, driving “out the stones of the kidney, & of the bladder, mitigating their pains“, as well as a drug capable of soothing the nerves in case of nightmares and calming anxiety [Durante]. In the words of Dioscorides:

“The dried root is given to those women, who do not purge themselves in childbirth: drunk in the quantity of one Almond, it causes menstruation. It is given with Wine for body aches: it helps the overflow of the gall, and the pains of the kidneys, and of the bladder. Its decoction made in wine, and drunk stagnates the body. Ten, or twelve grains of its red seed drank in austere wine, stagnate the red menses: they are also eaten for the vomiting of food, and for the gnawing of the stomach. Drunk by children, they break their stones, which begin to form. The grains, which are black, are drunk at the number of fifteen with honeyed water, or with Wine, to the gravacuore, which compresses during the night at sleep: and in addition to this, to the prefocations, and the pains of the matrix.” (see [Mattioli]).

Paeony root was used in Greek medicine to relax the expectant mother, reduce cramping, and encourage labor. After the birth it was used to stop fits and seizures in children. [Wood]

Galen mentions the ancient custom of tying a peony root around the neck of a child to prevent epileptic seizures. Although skeptical, Galen tested this method on an epileptic boy and found it curative. [Durante, Mattioli, Wood] This usage has been confirmed by Matthew Wood to work with children, adults, and even dogs. [Wood]

William Salmon (1710) notes that the decoction or extract works just as well as hanging the root around the neck. [Wood]

According to Castore Durante, “the root of the peony […] frees those who hang it to the neck from epilepsy, & not only benefits this evil, […] but also all the other defects of the head: & the same makes its seed, which is valuable also against ghosts, & fears”. [Durante]

According to the same author, also the distilled water of the roots and flowers “comforts the heart, & given three tablespoons of it helps the children, who suffer from epilepsy. It is good for the apoplectic, & the paralytic”. And also “the seed of the peony, given thirty grains cleaned from the rind & powdered to drink with wine, are worth to those who have lost their speech.” [Durante]

Paeony root can be beneficial in brain injuries, besides epilepsy. It’s interesting to note that William Coles, in his “Adam in Eden” (1657), reports that peony buds look like a head, complete with sutures, and so it has to be a brain or head remedy. [Wood]

In the nineteenth century, the powder, the extract, the syrup and the decoction of peony root and seed were used, as narcotics and antispasmodics, in the treatment of epilepsy and intermittent fevers. [Peroni]

According to Simone Iozzi, the fundamental biological activity of the peony is to mitigate the excessive excitatory reactivity of the central nervous system when it is in a state of hyperexcitability with repercussions on the physical body and especially on the abdominal organs (spastic colitis, dysmenorrhea), without “affecting in the least the psychic state of the subject”. [Iozzi]

Peony root is indicated when the period is characterized by cramping and heavy bleeding, conditions usually associated with an estrogen excess profile. In these cases, the appearance of acneform sores on the chin (usually a sign of inflammation in the ovaries and estrogen excess or intolerance to estrogen) is a specific indication. [Wood]

Peony is an excellent remedy in middle-aged, menopausal women who fit the estrogen excess profile: plump, red, flushed, warm. It is also indicated in young women who are oversensitive to estrogen. [Wood]

The extracts has vasodilator and muscle relaxant properties, acting as general sympatholytics with a negative bathmotropic effect on the heart. A regulating activity on gastric acidity and a protective activity on the mucous membranes of the stomach has been observed. [Rossi]

The roots of Paeonia lactiflora collected in the wild and those of Paeonia anomala subsp. veitchii are only used to produce Chi Shao. Bai Shao is obtained from the roots of the cultivated Paeonia lactiflora alone, through a transformation process (Pao Zhi) which consists of boiling and subsequent elimination of the external peel. Chi Shao always has the outer rind intact.

Bai Shao is essentially used to tonify the Blood, while Chi Shao is used to purify the heat and cool the Blood.

It is also used in night sweats; when there is “deficient blood,” yang floats to the surface and causes heat and sweating. For this reason it is also used in fever with spontaneous sweating. It is suited to Liver Qi stagnation or stagnant Qi with hypochondriac pain, breast distention, and irregular menses. It is also used for muscle spasms and pain of hands and feet, abdominal pain and tenesmus or straining in dysentery. Headaches and dizziness caused by “overactivity of Liver Yang” come under its purview. It is contraindicated when there is cold or Yang deficiency. [Wood]

According to Matthew Wood, there are very few differences between P. officinalis and P. lactiflora [Wood]. The same author compares pulsatilla, black cohosh and peony (previously three Ranuncolaceae) calling them the “three sisters”. They all have a powerful action on the female hormonal system, but pulsatilla acts primarily on the regulation of the hypothalamus-pituitary axis, black cohosh acts on estrogen deficiency and peony on excess estrogen. [Wood]

The root is an aromatic bitter, slightly astringent with a hint of sweetness.
The nature of peony is dry and slightly warm. According to Galen, the “temperament of Peony, […] is desiccative, and composed of thin parts, but not strongly hot, but temperate, or warmer in temperament” (see [Mattioli]).

Peony is classically considered a solar plant, as can be seen, for example, in Castore Durante who describes it as an “herb consecrated to the Sun” [Durante] and in Culpeper, according to which “it is an herb of the sun, and under the lion” [ Culpeper-Sibley].

Peony also exerts a regulatory action on the gastric activity and a protective action on the mucous membranes of the stomach; it sedates the central and vegetative nervous systems, operating as a general sympatholytic with a negative bathmotropic effect on the heart [Durante, Mattioli, Peroni, Rossi]. An accelerating activity on macrophage phagocytosis has been demonstrated for the tincture [Peroni].

Peony roots and flowers are normally used; according to some authors, seeds are also used, which exert an emetocathartic action (see for example [Peroni]).

According to Castore Durante, “The WATER distilled from the roots alone is worth more valiantly to the same things, first infusing the roots into wine, & then distilling the whole thing” [Durante].

The mother tincture is made from the fresh roots picked during the autumn; the final solution has an alcohol content of about 60° [Rossi]. Tea or tincture are administered in small to moderate doses [Wood].

The fresh root hung around the neck is the best method for seizures, since the body is exposed to a constant, small dosage through the vapor rising from the drying root. When the root dries out, use another one [Wood].

Contraindications and side effects

P. officinalis has traditionally been used in Persia as an abortifacient. A crude alcoholic extract of the root produced uterine stimulation in the rat [Madari]. For this reason it is contraindicated in pregnancy.

Its use is not recommended in severe forms of dysentery [Peroni].

The following contraindications are reported in Chinese medicine:

Only Paeonia officinalis has been proved homeopathically so far.

The homeopathic mother tincture is prepared with the fresh root dug in spring (in autumn the root is said to be inert). [Clarke]

Paeonia officinalis < replanted: it takes a few years before it will blossom again. [Scholten]

The main issue is the home and family. They need a stable home and have an aversion to changes. Sudden and unexpected changes in particular seem to affect them profoundly. They cannot stand being sent away from home. They get complaints from being left by their family. They can feel it as if they are being cut from their roots. That is probably why they have marked cutting and stabbing pains, as if from knives. [Scholten]

They are anxious they may lose their family. In nightmares this can come back as the death of family members. In general they can be anxious people, having a fear of strangers and new things. They prefer to keep things unchanged. It is a kind of nostalgia. When they lose their home or something similar they can become very depressed. [Scholten]

Anxious, apprehension, timid, afraid to talk with any one, < evening. [Clarke, Hering. Scholten]

Ailments from loss of home, marriage, being cheated, robbed. [Scholten]

Sleep: restless; sleepiness all afternoon; starting on falling asleep, even during day. [Clarke]