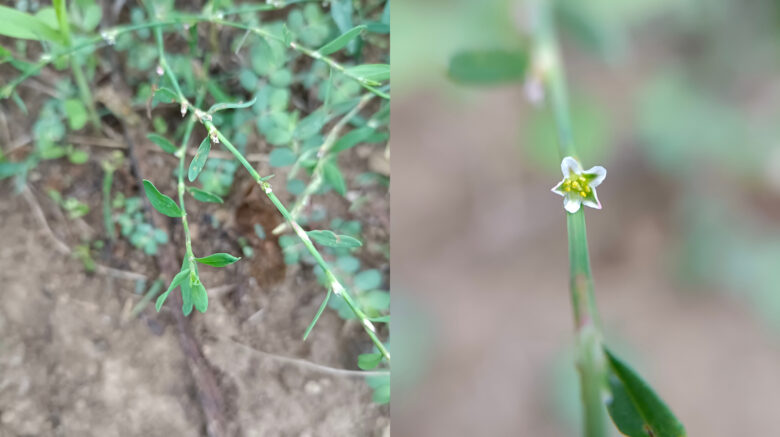 Polygonum aviculare is generally ascribed to a complex formed by several species, which are considered by some authors as subspecies of P. aviculare.

Given the peculiar similarity of the species belonging to the complex, it is very likely that the ancient authors (mainly European ones) made no distinction between them and used them in a similar way. For example, in Italy, where the P. aviculare complex includes P. aviculare L. (=P. aviculare s. str.), P. rurivagum Jord. ex Boreau, and P. arenastrum Boreau, the Renaissance botanist Andrea Mattioli describes only the male polygonus, reporting that “its flowers are now white, now red”, without mentioning any other difference. For this reason it is plausible to believe that they were used in the same way, with similar therapeutic results.

Here we only deal with P. aviculare L. (=P. aviculare s. str.), but it is likely that the other species of the same complex have similar effects. The Italian Domenico Atzei also treats the three Italian species indistinctly from the therapeutic point of view [Atzei].

Obviously, differences between the species exist. For example, P. aviculare is particularly rich in silicon, more than P. arenastrum (according to [Hodson], P. aviculare contains an amount of elemental silicon almost three times greater than that contained in P. arenastrum).

Polygonum aviculare is an annual plant, very branched and with creeping, long and thin stems with many nodes: this feature has earned it the popular name of knotweed (centinodia in Italian). The popular name sanguinaria (or sanguinalia, from the Latin sanguis, “blood”) is linked to its anti-haemorrhagic abilities, and swinegrass reminds us that the plant is browsed by pigs.

Despite being little used today, P. aviculare, in addition to being an edible plant (leaves and young plants), has a great therapeutic value. In the past, in fact, it was considered a valid remedy for a large number of problems, so much so that in some areas of Italy it was called centimorbia (meaning “one hundred diseases”): “The people by ancient tradition believe it to be specific for a large number of diseases, from which it had the name of centimorbia, that is, good for a hundred diseases.” [Targioni-Tozzetti].

It is rather rich in silicon. According to some analyses, it contains about 1.97% by weight of total elemental silicon, of which 1.39% organic silicon, 0.11% mineral silicon in soluble form and 0.47% silicon in the form of insoluble silicates (data calculated with respect to the dry plant, see [Hodson, Kolesnikov])2. This gives the knotgrass some important functional characteristics, including a certain purifying activity and the ability to strengthen the connective tissue.

Although not intense, the flavor of P. aviculare is complex: bland (due to mucilage), astringent (due to tannins), sweet, slightly aromatic (coumarins), slightly bitter and slightly saline.

Such complex flavor is indicative of tonic, demulcent, soothing, anti-inflammatory, consolidating properties and the ability to solve/expel phlegm (either fluid or thickened) and melancholy.

The plant has been described by Dioscorides, as reported by Mattioli (who calls it male polygonus or sanguinaria, in order to distinguish it from female polygonus or female sanguinaria): “Its juice drunk has frigid and constricting virtues: it stagnates the spit of blood, and the body fluxes; it is good for the choleric, and for the distillations of urine, because it evidently makes people urinate. Drunk with wine, it heals snake bites. It is drunk in case of fevers, which are [not] continuous, an hour ahead of the beginning. Applied below it stagnates the fluxes of women. It is distilled in the ears, which leak, and in those which hurt. Cooked in wine, and added Honey to it, it heals the ulcers of the male members very well: the fronds are usefully plastered for the burning of the stomach, the spitting of blood, the corrosive ulcers, the shingles, the inflammations, the collections of putrid matter, and the fresh wounds.” (Dioscorides, according to [Mattioli]).

Again Mattioli, quoting Galen, writes: “The polygonus is somewhat constricting, and so truly there is of frigid wateriness in it, that it can be easily placed among those medicaments, which are frigid in the second order, or in the beginning of the third. And so for this reason it benefits, plastered outside, those who have too warm stomachs, as well as erysipelas, and hot phlegmons3.” [Mattioli]

The therapeutic activities of the plant has been well summarized, in more recent times, by William Salmon: “It is cooling, drying, and binding” [Salmon]. This plant in fact, as we have seen, is capable of resolving inflammation, healing wounds, stopping flows of any type (blood, organic liquids, exudations, …) and drying/eliminating excess fluids, but it is also able to moisten, break urinary stones and gallstones, calm spasms and “open the pores”.

According to Lyle, for instance: “This herb is a mild, diffusive, stimulating and relaxing, antispasmodic nervine. In hot infusion it influences the circulation and is diaphoretic, quite stimulating to the capillaries and increasing the periodic flow, especially if a little Zingiber be added. Cold preparations are diuretic and relieve the aching back and bladder. For irritable coughs it is a good addition to Aralia, Inula and Prunus.” [Lyle]

Targioni-Tozzetti writes: “The whole plant, fresh or dry, is used by country people to make decoctions against coughs and light bronchitis, and as a diaphoretic in rheumatisms, and as an astringent in prolapses and hemorrhages. Levrat-Perrotton praises it a lot in concentrated decoction, against even stubborn diarrhea.” [Targioni-Tozzetti]

Its ability to break down kidney and bladder stones is described by Clymer: “its chief influence is on the bladder, and it has generally been used for the removal of stones from the bladder even after all other treatments had failed. It is not given to prevent the formation of stones, but to dissolve stones already formed. For this purpose is best combined with Shave Grass three or more times a day, either in infusion or in tincture.” [Clymer]

More modern indications come from Serge Dewit and Jean-Claude Leunis: “Due to the richness in tannin, knotgrass is known as an hemostatic and antidiarrheal. Rich in silicon, it is remineralizing. We use it in angor, cerebral arteritis, Raynaud’s disease and localized circulatory deficiencies. The plant is rich in flavonoids (avicularoside) and coumarin, It has antiviral properties and this is not strange given its richness in flavonoids. It has been shown that it stimulates γ interferon and that it activates the polynuclear cells, probably activating the IgG subclasses. This is a hypothesis to be studied. We use it with Rumex acetosella in the treatment of asthma. It can also be used as a therapeutic adjuvant for diabetes in which it reduces thirst. It is interesting as an adjunct in the treatment of gout as it increases the clearance of uric acid. […] Its biological action covers the exudative, steatosic and amylotic phases.” [Dewit-Leunis]

Some sources report that P. aviculare is traditionally used to treat hypertension, and a vasorelaxant activity of its extracts has been demonstrated ex vivo [Yin].

This herb is reputed most appropriate when Heat and Dampness are equally severe. [AmDragon]

In the Hippocratic-Galenic system P. aviculare is described as cold and dry in the second degree or in the beginning of the third degree:

William Salmon describes the plant as “cold in the first degree, and dry in the second”. [Salmon]

In TCM it is described as Slightly Cold (or Cool or Neutral), as having a bitter taste, and as entering the Bladder meridian. [AmDragon]

According to Herzog, “it has indeed some acridity in its taste”. [Herzog]

A personal proving with the fresh plant and the tincture has shown a delicate but complex flavor: bland (because of mucilage), astringent (due to tannins), sweet, slightly aromatic (cumarins), slightly bitter (this taste is more easily perceived in the mature leaves), and slightly saline.

The signature of the knotweed is mainly Saturnine (both according to Manfred Junius and to Culpeper [Culpeper, Junius]), reasonably due to its cold and dry nature and its cooling and consolidating activity. The exaltation of Saturn in Libra gives this plant the ability to act on the kidneys and regulate the hydrosaline control, and so to stimulate the degradation of stones and body “tartarous” matter.

The aerial part of P. aviculare are collected before or, better, during flowering. The anthesis is very long and can begin as early as May and continue up to October. The root may or may not be harvested. The seeds must be collected when ripe.

P. aviculare can be used both in infusion/decoction and in tincture.

Contraindications and side effects

P. aviculare is a plant generally considered safe and non-toxic.

According to TCM, it is contraindicated for those with difficult urination due to abdominal weakness. Overdose can cause Qi Deficiency. It may cause dermatitis or gastrointestinal disturbance. Over consumption can cause depletion of Jing. [AmDragon]

P. aviculare has not been thoroughly proven so far. The following is from Jan Scholten and Boericke [Boericke, Scholten]:

2. The maximum content of elemental silicon (i.e., expressed as an element and not as silica, silicates or silicic acid) in horsetail (Equisetum arvense) is slightly greater than 3% (see for example [Bye, EMASil, Labun]).

3. Phlegmon: an acute inflammation of the lax and adipose cellular tissues interposed between the various anatomical planes or around the various organs. They can be superficial (i.e. affect the subcutaneous tissue) or it can affect deeper tissues. According to the type of inflammation, suppurative phlegmons and necrotic (or gangrenous) phlegmons are distinguished.

4. In the figure in the book by Dewit and Leunis, the deposition phase (steatosis) mentioned in the text is missing. Here it is added for completeness.

5. It is indeed diaphoretic.

8. Heberden’s nodules are usually round, solid, swollen osteophytes (or bone spurs) that form on the distal interphalangeal joints. Nodules on the proximal joints are also called Buschar’s nodules.